“I’m running a part 2 workshop…” Brian said “are you interested?”

And so I came to be sat in the Encaustic Art Plus workshop (part 2) on a beautiful autumnal monday…did you know, as cold as it is, that winter doesn’t officially start until the winter solstice 21st December?!

Today’s workshop will build on skills we learned previously and explore other methods and techniques that can be combined to introduce variety to our encaustic painting. We’re going to use stamping and hotplate techniques and I’m excited by the sight of a nugget of gold beeswax lurking toward the edge of the tin….. 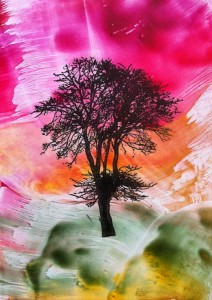 First up, tree inked, stamped and “fixed” with beeswax before overpainting  with the liquid gold that appears as I place my nugget on the iron. My encaustic tree grows beneath something resembling the Aurora Borealis.

A slight change in direction and we’re off to the depths of the ocean. The stylus tool picks out the detail of the ocean floor and a solitary star fish.

Something slightly different next…we dismantle our irons and with all the anticipation and excitement that comes with a child’s Transformer toy they become a personal hotplate. 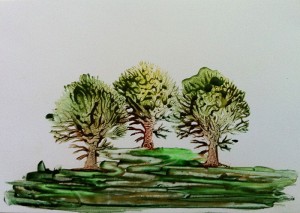 The play of beeswax on the heated surface of the card presents new opportunity and challenge in equal measure.

The introduction of a “palette” to paint from as melted beeswax is transferred via stamps to a second card…reheated to create an opportunity for a wax-drawn forest floor beneath the broccoli like trees. 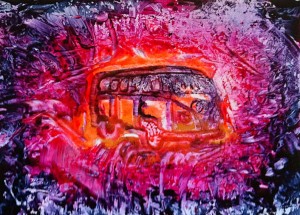 A sheet full of vivid molten wax is transformed when introduced to another stamp…the iconic VW Camper emerges from the molten heat of Hell.

The versatility of this medium and the vibrance of the available colours have warmed another cold afternoon which has passed all too quickly.

Fortunately there is just enough time left to consolidate all the tools and techniques we have worked with over the two workshops and create our very own encaustic masterpiece, so……………….. Here Be Dragons! 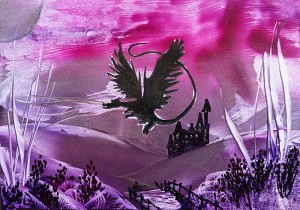 I have often asked myself the question “am I an artist?” You’d think the answer was straightforward really, but what is an artist?

Most definitions suggest an artist is someone who makes “art” to express what they are thinking or feeling. That’s fine, but what about commission work then, interpreting what someone else thinks or feels and translating it into an “art work”?

Some definitions suggest art is something that is functional and generally aesthetically pleasing to the eye (Tracey Emin’s contemporary work “My Bed” might disprove this theory). So perhaps we need to think more about form and content, or the skill and techniques involved to determine whether someone is an artist?

That raises another question…who decides whether I’m an artist? I have already made the decision to use the word on my business card, but to be honest I’m more inclined to think the decision rests with others. I know that my intention is to produce art that is aesthetically pleasing both in my opinion and others’. I also hope my work connects with and provokes a response in others. Most of all though I believe it’s the judgement of my peers that determines the answer to my question “am I an artist”? 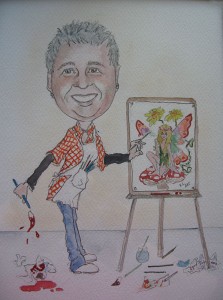 So, I received this wonderful caricature as a gift for my birthday recently. I love the fun, bold colours in the picture and the fantasy fairy image on the easel.  My birth date is cunningly incorporated, along with my web identity (KL Art). Oh, and I really love the virtual weight loss around the thighs and bum!

Most of all though I feel reassured by the affirmation that there are people out there who believe I’m an artist!

Thanks for the confidence boost – Stephen, Andrea & kids!

Ok, so the floor’s finished and I must now find a way to create the various shades and textures of black that appear in other areas of the kitchen.

“Salvatore, I’d like to introduce you to Glaze Medium and pearlescent paint, as well as the colours I’ll be adding to separate my blue black gloss-painted kitchen door from the fluorspar flecked charcoal grey black of the worktops and the metallic shiny black of the oven…..” (Yes, I have also developed the rather odd habit of talking to my painting throughout the course of my working day).

A bit experimental, but I’m using a pearlescent medium, combined with a very pale grey paint to under-paint the kitchen work tops and create the fluorspar flecks in the granite. 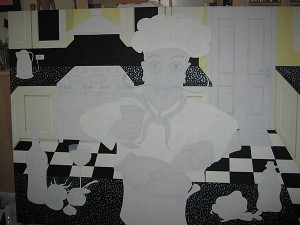 These will disappear later as I overpaint with darker glazes and dance as they catch the light in the finished painting, but in the meantime it does look rather strange and I have to trust the experiment will work at the time of painting!

The kitchen cupboards prove easier to assemble than an Ikea flat pack and it’s quite nice to have laid some colour on the walls too! 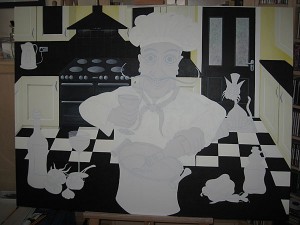 and I’m getting quite excited as I add more features to the room, including the appliances and a hint of colour behind the the frosted windows in the door.

The reflected light of the cooker hood is achieved with a dry brush technique over a glazed black wall.

Each completed piece of background brings me closer to the fun stuff in the foreground (why do I always feel like this like this when I’m painting?).

Fortunately, my pals agree with me……..woohoo!!!! Now, where did I put those paints?

You can see the finished colours in all their glory in the KL Art Gallery.