What better than a nice day out with old chums (chums of old, rather than aged, though saying that…) and an invitation to meet at Manchester Art Gallery.

Wrapped up warm (I’m off to Manchester after all) I opted for the relaxation of a gentle journey through the beautiful Hope Valley on the Transpennine Express. Points failure, train delays and a lost Manchester cabbie later I enjoyed a delightful lunch (and a bit of a giggle)   in the Manchester Art Gallery Restaurant. The day was already looking like a great a success and then came the art!

The scale of some of the works at Manchester’s city centre Gallery is amazing and the scenes depicted quite breathtaking. It’s always lovely to see a Turner close up and to marvel at the wondrous work of of his peers and predecessors. I am much less impressed by the “Art” of the paper cut artist 20,000 “feathers” hand cut from ordnance survey maps feels much more like OCD than art to me, but each to their own. My preference is for the realism of some of the works that facilitate a real connection – that usually means the figurative images with the  most realistic eyes and/or facial expressions. That and an interesting “back story” tend to hook me every time. 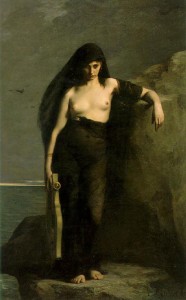 Among my favourites today this painting  by Charles Mengin of Sappho, considered to be one of the one of the nine lyric poets of ancient Greece.

The image has a haunting, mystical quality that mirrors what little is known of the life and death of Sappho. Rumours abound about her sexuality and much of her work was destroyed, either deliberately or otherwise.

It has also been suggested that she committed suicide by leaping from the Leucadian cliffs for the love of Phaon, a mythological ferryman.

2 thoughts on “What is Art – Charles Mengin?”